For many years researchers have wondered how Earth’s oceans could produce some 4% of the world’s methane, given that the potent greenhouse gas is normally produced in anaerobic environments such as swamps, not in oxygenated places like the sea.

Now a team of researchers led by William W. Metcalf and Wilfred A. van der Donk at the University of Illinois, Urbana-Champaign, think they may have resolved the conundrum. They report that a marine microbe called Nitrosopumilus maritimus has the biosynthetic machinery to make methylphosphonate, a molecule that other ocean organisms then metabolize to methane (Science, DOI: 10.1126/science.1219875). 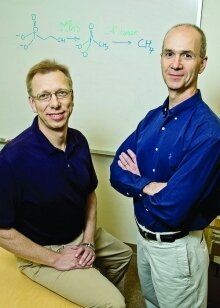 Because many other microbes in the ocean also possess the same biosynthetic machinery, the team proposes that methylphosphonate-producing organisms are responsible for the sea’s 4% contribution to the global supply of methane.

“This eloquent study has broad implications—from phosphate biochemistry in the sea to climate science,” comments David M. Karl, an oceanographer at the University of Hawaii, Manoa.

In 2008, Karl and his colleagues reported that if oxygen-loving marine microbes are fed methyl­phosphonate, they break it down to methane and phosphate (Nat. Geosci., DOI: 10.1038/ngeo234). Still, there was no proof that methylphosphonate naturally exists in the ocean as a starting material for microbial metabolism.

“We showed only the degradation pathway, with methane gas as a by-product,” Karl says. This “tour de force” study “shows for the first time that marine microbes can and do produce methylphosphonate and presents the new biosynthetic pathway” leading to methane.

The team is also trying to figure out why N. maritimus produces methylphosphonate in the first place. The archaeon seems to attach methylphosphonate to macromolecules, likely located on its outer surface, but the microbe does not do the subsequent breakdown to methane and phosphonate itself, van der Donk says. This reaction is left to other seafaring microbes that gobble up the methylphosphonate as a source of phosphorus, an essential element often available only in limited amounts in the ocean.