Materials: Hydrophilic-oleophobic combo could clean up oil spills
By Stephen K. Ritter
Department: Science & Technology
News Channels: Environmental SCENE, Materials SCENE, Nano SCENE
Keywords: hydrophobic, hydrophilic, membrane, POSS, oil spill, emulsion, separations
SUPERMEMBRANE SEPARATES OIL AND WATER WITH EASE
Even though oil and water don't mix, when they do come together, as in oil spills, they're difficult to separate. Researchers at the University of Michigan and the Air Force Lab have now developed a membrane that separates the substances with ease, via gravity filtration. In this clip, watch the membrane in action and learn about the materials it's made from.
Credit: University of Michigan/C&EN/YouTube

Oil and water usually don’t mix, but when the two end up together, say in an oil spill or in an emulsion, they can be nearly impossible to completely separate. But by combining a water-loving polymer with an oil-repelling silicon-based material, researchers have created a new breed of membrane that can separate bulk amounts of any type of oil-water mixture by simple gravity filtration.

The scientific team that created the hygro-responsive membrane, as it is called, believes it will become an energy-efficient, cost-effective means of cleaning up oil spills.

Traditional membrane-based filtration systems are energy-intensive because the targeted mixture typically must be pumped through the membrane for efficient separation. These membranes are subject to fouling by viscous materials such as oil, lose their effectiveness over time, and typically aren’t versatile enough to separate all types of oil-water mixtures, which range from oil and water layers to surfactant-laden emulsions.

A team led by materials scientist Anish Tuteja of the University of Michigan has devised membranes that for the first time sidestep such limitations (Nat. Commun., DOI: 10.1038/ncomms2027). Arun K. Kota in Tuteja’s group prepared the membranes by dipping polyester fabric or stainless steel mesh into a mixture of cross-linked polyethylene glycol diacrylate, which is hydrophilic, and fluorodecyl polyhedral oligomeric silsesquioxane, which is oleophobic. 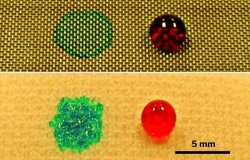 The fluorinated silsesquioxane, developed by team member Joseph M. Mabry and coworkers at the Air Force Research Laboratory at Edwards Air Force Base in California, is a Si8O12 cage molecule with a fluorodecyl group attached to each silicon atom. The combination of fluorinated groups and the microcrystallinity of the material make it one of the lowest surface energy materials known, imparting hydrophobic and oleophobic properties, Mabry says.

When an oil-water mixture or emulsion is poured onto one of the membranes, nothing appears to happen at first, Kota explains. After a few moments, rough micro­crystalline silsesquioxane regions on the membrane surface reconfigure to form a smooth, noncrystalline surface that allows the polymer to hydrogen bond with water. This reversible change in surface morphology allows water to completely wet the surface and permeate the membrane, which holds back the oil.

These AFM images of a hydrophilic-oleophobic membrane show that the dry surface is covered with crystalline regions of fluorinated silsesquioxane (left), but when wet with water the surface reconfigures and becomes smooth, allowing the water to pass through.
Credit: Nat. Commun.

The team has separated batches of oil-water mixtures and emulsions and shown that a continuous-flow system can operate for more than 100 hours without fouling the membrane or slowing down. Gibum Kwon in Tuteja’s group further led the development of a system that uses an electric field as a trigger to control membrane wetting for on-demand separations (Adv. Mater., DOI: 10.1002/adma.201201364).

These membranes represent “a big step forward in energy-free approaches for removal of oil contaminants from water,” says Francesco Stellacci, a nanomaterials scientist at the Swiss Federal Institute of Technology, Lausanne. “It’s noteworthy that the method works for all oil-water mixtures with such high efficiency.”

The membrane design is patented, and discussions are under way with multiple business partners regarding commercialization, Tuteja tells C&EN. Kota adds that the simple dip-coating preparation method should allow the team to make membranes of any size or shape. The researchers envision the membranes being used to not only clean up oil spills but also to treat wastewater, purify fuels, and separate emulsions used in manufacturing processes.

“This is a simple yet very creative idea that may lead to great improvement in membrane separations,” says chemical engineering professor Abraham Marmur of Technion—Israel Institute of Technology, who studies surface-wetting phenomena. “It has the potential of saving energy in a wide range of applications. It is too early to tell whether it can be efficiently scaled up, but intuitively it does appear to be very promising, mainly because of its elegant simplicity.”

Comments
Matthew Kramer  (09/04/2012 at 9:28 PM)
I would love to use it in my lab for seperateion of "crushed diatoms" and the resulting oil and kerosene mix. You would have seawater and jet fuel!!

I would love a sample!! it looksto good to be true.
» Reply
Wendell N. Harkey  (09/06/2012 at 2:50 PM)
Have you thought of using this with surface separating vessels on oil production leases where the emulsion consists of raw crude oil, produced water, various formation solids, and natural gas? We currently use liquid de-emulsifiers by injecting them into the system with different types of pumps.
» Reply
Leave A Comment
Most popular
Related Articles
Copyright ©2012 American Chemical Society