Instructors aim to make science more relevant for undergrads not majoring in the subject
By Lauren K. Wolf
Department: Education
Keywords: kitchen chemistry, education, food science, Harold McGee, molecular gastronomy
THE CHEMISTRY OF COOKING
You're a chemist any time you step foot into the kitchen, says Matthew Hartings, a professor at American University, in Washington, D.C. In this clip, Hartings makes macaroni and cheese and talks about his class, "The Chemistry of Cooking," which is meant for undergraduates not majoring in science. He teaches the course with the goal of making chemistry more relevant and interesting to non-science majors.
Credit: C&EN/YouTube

Standing at the head of a classroom, Matthew R. Hartings holds up a can of evaporated milk and gives it a shake. “Adding evaporated milk is an easy way to stabilize a lot of cream-type sauces,” he says, as 50 sets of eyes follow his movements.

“When you evaporate milk, you’re getting rid of its water,” Hartings tells the students. “But it still has its other contents, including lots of emulsifiers,” which give it stabilizing power. Then he pours the milk into a heated pot with butter and salt—the first step in a macaroni and cheese recipe on the wall behind him.

It might sound as though Hartings is lecturing for a home economics class or perhaps even for “Sauces 101” at a culinary school. But he is, in fact, teaching a science class for undergraduates. Within the past few years, “The Chemistry of Cooking” has become a popular course at American University, in Washington, D.C., filling up with students who are not science majors but who need to take a laboratory-based class to meet their course requirements. The class likely attracts freshmen and sophomores with its promise of free home-cooked meals, but it also supplies them with a good-sized serving of science.

“One of the things I love to do with this course is to show the students how they’re actually chemists anytime they set foot in a kitchen,” Hartings says. To do this, he lectures about the molecular components of food and the reactions those ingredients undergo during cooking. He also guides the students through lab experiments in which they learn to make foods such as cheese and jelly.

Classes like this one have been popping up around the country, bolstered by the success of cooking shows like Alton Brown’s “Good Eats” and the popularity of the so-called molecular gastronomy movement. Although they approach the topic differently, the professors who teach kitchen chemistry are unified in their determination to make science relevant to students who normally shy away from the discipline.

Ask the instructors about how they developed these courses, and most of them will mention one of two inspirational resources.

The first is a seminar titled “Kitchen Chemistry” that was taught at Massachusetts Institute of Technology from 1999 to 2009. Launched by chemist Patricia Christie, the class was part of the Experimental Study Group, an alternative academic program at MIT geared toward small, group-learning environments. Christie tells C&EN that she started the course because she wanted to showcase a beloved topic: cooking. Plus, “I figured, for an undergrad course, if you feed them, they will come,” she quips.

Christie developed the syllabus for “Kitchen Chemistry” by starting with recipes she wanted to teach the undergraduates, many of whom were away from home for the first time and didn’t have any cooking skills. “All recipes are really just chemistry experiments,” she contends. So she chose some basic dishes from recipe books and then stepped back and asked herself what chemistry concepts could be illustrated by cooking those foods.

With feedback from students, Christie honed her recipes, readings, and homework assignments over the years, eventually posting them on MIT’s OpenCourseWare website (http://bit.ly/9ohQaT). The materials have since inspired a number of professors elsewhere to start up classes with a similar bent. 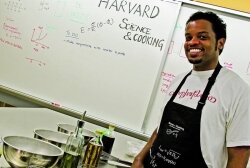 The second course-planning resource most kitchen chemistry instructors mention is the book “On Food and Cooking,” written by Harold McGee in 1984. Christie was even inspired by the hefty tome, which was one of the first texts to break down food science in a readable way. When she taught “Kitchen Chemistry,” Christie required her undergrads to buy a copy. “It’s a great reference book,” she says, “and it’s easy to read.”

McGee himself, who now writes the column “The Curious Cook” for the New York Times, has also gotten in on the science class scene. He’s one lecturer in an impressive lineup of instructors who help teach “Science and Cooking: From Haute Cuisine to Soft Matter Science” at Harvard University.

Established a few years ago, the course is kitchen science on steroids: Famous chefs like Spain’s Ferran Adrià and New York City’s Wylie Dufresne fly to Boston during the fall to deliver a lecture to 200 or 300 undergrads. Weekly labs involve activities such as examining freshly prepared aioli—a garlic-based emulsion—under a microscope and comparing the elasticity of rare and well-done steaks.

David A. Weitz, a physicist who leads the class, says the seed for the Harvard course was planted during a visit by Adrià in late 2008. “We were having him give a public lecture at 6:30 PM,” Weitz says. “At 3:30 PM, the lecture hall was getting full. And at 4:30 PM, we had to call the police because the aisles were getting blocked.”

After the crowd-drawing talk ended, Adrià sat down with Weitz and Michael P. Brenner, an applied mathematician at Harvard, to chat about chef-scientist collaborations and using the popularity of food to help educate the public about science. From that discussion, “Science and Cooking” was born.

Eventually, Adrià brought on board a group of his culinary friends to lecture. Now, one chef lectures per week, Weitz says, and afterward, he and Brenner use that talk to teach science.

Not all schools have a troupe of famous chefs at their disposal, however. And many don’t have a state-of-the-art, food-safe lab like the one at Harvard. To overcome these limitations, kitchen chemistry instructors elsewhere have gotten creative with their courses.

American’s Hartings, for instance, demonstrates how to make a dish and serves it to his students in the lecture hall during almost every class. That’s because his students “have to do their own food experiments in an actual chemistry lab,” he says. Food-safe space isn’t available for a class his size at American, he explains, so the fruits of the students’ lab labors are inedible.

Jeffrey A. Hansen, an organic chemist at DePauw University, in Indiana, teaches his “Sweet and Savory Science” course in a campus kitchen to circumvent the cooking-space issue. That’s possible, he tells C&EN, because the small class takes place during DePauw’s three-week-long winter semester, when fewer students are on campus and fewer kitchens are in use. 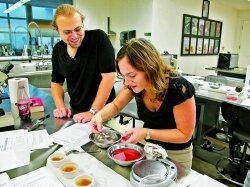 Hansen attracts students to the class, not with famous chefs, but with the promise of lessons on knife skills and with cooking competitions. He breaks the class into teams, which have to prepare a menu based on an assigned theme. The students have to explain the chemistry involved in their meals and then serve them to a panel of faculty and staff judges.

“The more they understand the chemistry, the more control they’ll have over the final product,” Hansen says. “I want them to come out of the class with a greater comfort level in the kitchen.”

At the University of Wisconsin, Eau Claire, biochemist Scott C. Hartsel has also commandeered a kitchen on campus to teach his new food science class—this one in a residence hall. Hartsel is joining his wife, English instructor Jacqueline Bailey, to teach a new course, “Food, Glorious Food!” this fall.

Because UW Eau Claire is a liberal arts school, Hartsel says, instructors there are encouraged to participate in interdisciplinary courses. So he and his wife came up with this class, which will combine chemistry, cooking, and discussions about food’s impact on culture.

“When students think about chemistry, they usually think about refineries,” Hartsel says. “They don’t understand that the first chemical technology was really food—its cooking and preservation.” Hartsel hopes the new class will give them an appreciation for how chemistry is tied to human history.

Like Hartings, Joseph Provost, a biochemist at Minnesota State University, Moorhead, helps students prepare food during his semester-long class. But he also assigns take-home experiments, to be carried out in the student’s own kitchens.

Provost, who’s working on a textbook geared toward undergrad kitchen chemistry courses, says he teaches his “Science of Cooking” class to help make science more approachable for students. The undergrads taking these courses are history majors and English majors, he says. “Do they need to understand redox reactions?” he asks. “Or do they need to understand basic science principles? We can help them be better society members by understanding science in a practical way, rather than as magic—something they can never approach.”

Although students can’t learn every aspect of chemistry from this type of course, they can still learn some pretty serious concepts about the central science, says Sara J. Risch, a food scientist and consultant who has taught numerous seminars on the chemistry of food. Even better, she says, they retain it. When nonscience majors take pure chemistry classes, “they typically memorize a bunch of stuff, walk out the door after the last exam, and none of it sticks with them,” she says. With kitchen chemistry classes, though, “food is something they see and eat every day. People can relate more to it, and they’re more likely to remember it.” ◾