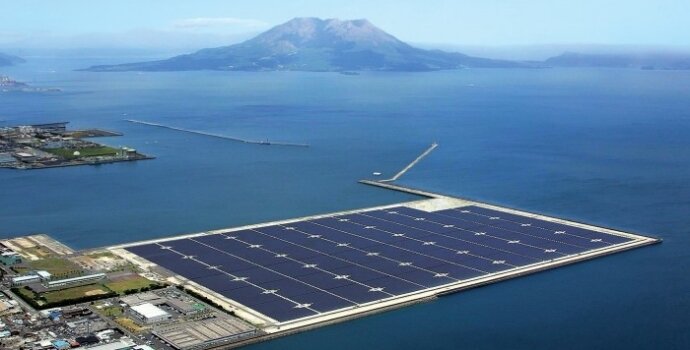 Last month, Kyocera officials unveiled a new utility-scale solar power plant in Kagoshima prefecture in southern Japan. At 70 MW, the photovoltaic installation is the largest ever constructed in the island nation.

The new solar power plant is a conspicuous sign that generous Japanese incentives for solar power, instituted in the aftermath of the March 2011 tsunami and subsequent disaster at the Fukushima nuclear plant, are working. Japan is now the second-­largest market for solar power after China.

But Japan isn’t the only country seeing an upswing. Government incentives and low prices for photovoltaics are accelerating demand for solar in China and the U.S., too. Even Europe is now contributing to the growth outlook for solar, experts say.

Europe had been heading in the other direction during the past two years, with governments in Spain and Germany rolling back support for solar. Such cuts, plus industry overcapacity, caused prices for the key solar-cell raw material polysilicon to plunge from a high of $79.00 per kg in March 2011 to less than $18.00 per kg last month.

As Japanese, Chinese, and U.S. demand began to turn around earlier this year, installers began buying up the massive inventories that had piled up in the wake of the European cutbacks. Starting in the third quarter, the new demand pulled all the way back in the supply chain to polysilicon, where suppliers are reporting that sales are going from stagnant to surging.

Growth will likely continue in 2014. New solar installations are expected to jump by 25% compared with this year, growing from 33 gigawatts to 41 GW of power capacity, according to Shyam Mehta, solar analyst at market research firm GTM Research. Production of materials that go into photovoltaics can’t increase by nearly that rate, which means “we will see a pretty tight market in 2014 across the board,” he adds.

For polysilicon maker Wacker Chemie, there was an additional factor in the industry turnaround: In late July, the European Union and China reached a compromise in a trade dispute over solar polysilicon exports to China. For now, no tariffs have been imposed.

“Demand picked up noticeably,” says Christof Bachmair, the company’s senior manager of media relations. “Before that, market participants were very unsure and customers were reluctant to place volume orders. They did not want to be caught in the middle of placing large orders and have to pay tariffs.”

But now the U.S. and China are fighting over solar. Starting in July, China tacked a steep tariff on polysilicon imports from the U.S. in retaliation for a U.S. tariff on finished solar panels from China. Each country has accused the other of unfairly subsidizing manufacturing and of selling artificially cheap products in each other’s market.

The trade war has thrown a wet blanket over what should be happy times for U.S.-based manufacturers Hemlock Semiconductor and REC Silicon. For the third quarter, Hemlock reported improved performance “despite pricing and volume pressure.”

Hemlock continues reduced production at its Michigan site and has postponed completion and operation of a new facility in Clarksville, Tenn. The company reported 400 layoffs in January.

Looking to the European example, Hemlock and its majority owner, Dow Corning, are pressing government officials for a settlement of the trade dispute. Hemlock spokesman Jarrod Erpelding says it will “support any efforts to find a mutually acceptable resolution which will enable and foster global cooperation and growth of the industry.”

The tariffs haven’t locked U.S. suppliers out of China, where the bulk of the world’s photovoltaic cells are made, experts point out. The polysilicon duties do not apply to material used in photovoltaics that China exports to other countries. GTM’s Mehta estimates that of 33 GW of modules that will be made in China next year, only 8 GW will be installed domestically.

Norwegian-owned REC Silicon, which makes polysilicon in Washington state, told investors that it saw strong volume growth in the third quarter, despite Chinese antidumping duties of up to 57%. Still, it warned that the dispute may have a significant negative impact on the firm’s results in the future.

Now that demand is moving up, manufacturers will turn their attention to improving profitability by managing output and avoiding another market glut. So far, prices for polysilicon have not noticeably increased, but they are on track to rise by 25% next year, GTM’s Mehta says. “Heading into 2014, we think it will be the most stable and profitable year for suppliers since 2010,” he predicts.

Wacker’s Bachmair hopes for greater stability in the years to come. He says the company expects to open a long-planned facility in Charleston, Tenn., in mid-2015. “Building up a greenfield plant of this size from scratch requires time, and sizable investments—you don’t decide on that on a quarterly basis. You have to make your decision and stick to it.”

Comments
Jim Parsons  (December 10, 2013 4:51 PM)
Good for them. Maybe the US could take a page or two from this example?
» Reply
Leave A Comment
Most popular
Related Articles
Advertisement
Info for Advertisers
Copyright ©2014 American Chemical Society