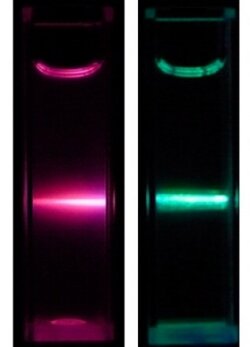 Researchers want small nanoparticles for diagnostic applications because the body can flush out tiny particles quickly, limiting any potential toxic side effects. Super-bright particles would help scientists detect low levels of biomolecules. Lanthanide ions provide the necessary luminescence but, because of the ions’ large size, researchers have struggled to add them to small nanoparticles. When researchers have tried to use well-known high-temperature synthesis methods to make extra-small particles, the result has been clumps of particles.

But other researchers had not previously tried to build lanthanide-doped inorganic oxide particles for biological applications, says Xueyuan Chen at the Chinese Academy of Sciences’ Fujian Institute of Research on the Structure of Matter. He and his colleagues built on another group’s method of carefully selecting solvents, and controlling concentrations of ions, making possible the synthesis of these lanthanide-doped particles (Adv. Funct. Mater., DOI: 10.1002/adfm.200801835).

Chen’s group made the nanoparticles by heating a benzyl alcohol solution of lanthanide ions, either europium or terbium, with a propanol solution of zirconium (IV) propoxide. The resulting doped zirconium dioxide particles were hydrophobic because benzyl alcohol covered their surface. To make the particles less hydrophobic and more biocompatible, the researchers replaced the benzyl alcohols with amines. The resulting nanoparticles were about 5 nm in diameter, which Chen says is small enough for the body to excrete quickly. When the researchers shined ultraviolet laser light on the particles, they glowed red or green, depending on the lanthanide.

Chen wanted to test the particles for use in fluorescence resonance energy transfer, a technique that indirectly measures distances between biomolecules. In FRET, a donor molecule or particle transfers energy to an acceptor, making this second molecule fluoresce. The intensity of the fluorescence correlates with the distance between the donor and acceptor.

To test the particles as bioprobes for FRET, the researchers ran an experiment in which they searched for a modified version of the protein avidin in solution. They attached biotin molecules to the nanoparticles’ amine groups. Biotin binds to avidin, which the researchers tagged with a fluorescent molecule that would accept energy transferred from the nanoparticles. The team used time-resolved FRET with the terbium-doped particles and detected avidin at a record-low concentration of 3 nM.

The researchers also used their nanoparticles to detect a molecule that cancer cells overexpress on their surfaces when they metastasize, urokinase plasminogen activator receptor (uPAR). Detecting uPAR could help diagnose cancer, and track the progress of the disease, Chen says. He and his team used the oxide nanoparticles to bind to human lung cancer cells in culture that overexpressed uPAR. Just as they had with biotin, they affixed amine groups on the nanoparticle’s surface that selectively bind to uPAR. When they shined laser light on a mixture of cancer cells and nanoparticles, they saw green fluorescence from around the edge of the cells, suggesting to them that the nanoparticles had bound the diseased cells.

Chen next plans to do a similar study on the same receptor protein in human blood serum samples. He also hopes to lower the technique’s detection limits.

The synthesis of these small lanthanide-doped nanoparticles is important, says Xiaogang Liu, from the National University of Singapore. Their ability to detect very small quantities of target molecules, like Chen’s avidin levels, will make these nanoparticles useful for early diagnosis of diseases like cancer or Alzheimer’s, Liu says.

Comments
Janelle Stewart  (09/05/2012 at 4:04 PM)
I believe this methodology will prove to be very efficient in this field of research. Not only are these compounds biologically "friendly" as they pose minimal threat to the cellular development and growth,but the use of amines to enhance the hydrophilic composition of the compound will prove very effective (perhaps glutamine was induced). I greatly appreciate the insight.
» Reply
Leave A Comment
Most popular
Related Articles
Copyright ©2012 American Chemical Society