Log In
Home > The Secret To A Clean Beach? Dogs That Harass Gulls
0

The Secret To A Clean Beach? Dogs That Harass Gulls 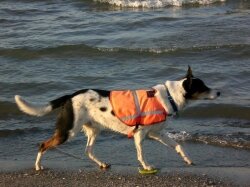 Anyone who has picnicked on a beach knows what a nuisance gulls can be. Now researchers have used dogs to chase gulls off a beach on Lake Michigan. They found that, in addition to annoying people, gulls produce droppings that are to blame for high levels of bacteria in the water (Environ. Sci. Technol., DOI: 10.1021/es302306b).

The bacteria found in gull droppings, including various Enterococcus species and strains of Escherichia coli, can indicate poor water quality. So Reagan Converse of the Environmental Protection Agency, in Chapel Hill, N.C., and her colleagues thought gulls could cause human health problems by contaminating water. Throughout August 2011, her team measured bacteria levels in lake surface water at North Beach in Racine, Wis.

After 11 days of monitoring the water’s bacteria levels, the team brought in collies trained to chase the gulls away. The dogs worked in shifts over 20 hours daily for 16 days, driving down the average number of birds on the beach by 98%, from 665 to 17 per day.

“Dogs would be less bothersome to beachgoers than many other gull control options, such as pyrotechnics and shotgun blasts,” says Converse.

The researchers used standard diagnostic techniques, such as culturing and polymerase chain reaction, to identify the bacteria in water samples that they had taken before and during the dog patrols. On four of 11 days before the dogs arrived, levels of Enterococcus and E. coli were higher than levels designated as unsafe by Wisconsin’s Department of Natural Resources. But when the dogs chased the gulls, neither bacterial type appeared above the advisory limit. Using a statistical model, the scientists found that a 50% drop in gull numbers led to 38% and 29% decreases in levels of Enterococcus and E. coli, respectively.

The levels of other potentially pathogenic bacteria, including Campylobacter, Salmonella, and Shigella, also dropped. Without the dogs on patrol, researchers detected potential pathogens on seven of 11 days. With dogs present, they found none.

Converse hopes the results will be useful for monitoring beach water quality, but points out that the team hasn’t determined whether the detected bacterial strains are human pathogens. As a result, she says, her team “cannot conclude whether gull waste is a threat to swimmer health.”