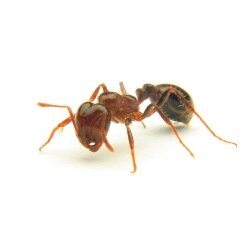 Pleased to Envenomate You
Proteins in the venom of Solenopsis invicta tell a story of the invasive fire ant species.
Credit: Luis Augusto Martelli Filho

The painful sting of the fire ant may be familiar to many Americans, but the proteins that make up the potent venom have remained largely unknown. Researchers have now used mass spectrometry to identify 46 proteins in the venom of Solenopsis invicta, an invasive species of fire ant (J. Proteome Res., DOI: 10.1021/pr300451g). They say the proteins could inspire drug discovery.

S. invicta is native to South America but now lives in the southern U.S., China, Australia, and elsewhere. Each ant produces very little venom, less than 1 µg. Proteins make up only a small portion of the venom, adding up to just a few nanograms per ant, with the rest consisting of basic compounds called alkaloids. The scarcity of venom proteins, and the difficulty of separating them from the alkaloids, has made them hard to study.

Mario Palma of the University of São Paulo State, in Brazil, special ordered a few milligrams of fire-ant venom protein that was free from alkaloids from Vespa Labs, a company that collects and purifies venoms, and analyzed the sample with two-dimensional gel electrophoresis. “We were surprised,” says Palma. “Compared to other ants, the number of proteins in the gel was small.”

They figured that some of the proteins in the venom must be too low in abundance to appear on the gel, so they decided to study the venom protein directly with mass spectrometry. The researchers added a protease to the sample. Then, they separated the fragments with a chromatography column that fed the protein pieces directly into a high-resolution mass spectrometer. Based on the masses from the fragments, they could work out the sequence of the parent proteins. Using an online protein database called Matrix Science, they identified 46 proteins based on their similarity to proteins from other ant species, snakes, spiders, wasps, and bees.

“We found a series of neurotoxins,” says Palma. “These aren’t common in social insects.” This finding may explain why some victims of the ants’ stings experience hallucinations, he says. The discovery also provides doctors with potentially useful information when treating the victims. Some scientists also think neurotoxins could find use as treatments for neurodegenerative diseases, Palma says.

Besides finding other types of harmful proteins, the researchers also spotted proteins that seem to have nothing to do with venom function, such as muscle proteins. These nonvenomous proteins may be artifacts of the method that the supplier had used to extract venom from the ant, and may not actually belong in the venom, Palma says.

The researchers also discovered proteins that likely function to benefit ant society. A few of the proteins kill bacteria, Palma says, which may explain a puzzling behavior that scientists have observed: The ants spray their venom around their nests. Other venom proteins bind pheromones and may help the fire ant lay down a chemical trail to communicate alarm or aggression to other colony members.

“It’s an excellent paper,” says Donald Hoffman, who recently retired from East Carolina University. It should provide fodder for entomological and medical research, he says. Palma plans to synthesize some of the proteins in his laboratory to study their biological function and pharmaceutical potential in more detail.