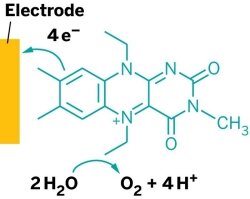 This N-ethylflavinium ion is the first organocatalyst shown to electrochemically oxidize water.

In the quest to find better catalysts for splitting water into oxygen and hydrogen, chemists have discovered that a small organic molecule related to the vitamin riboflavin can substitute for transition-metal catalysts traditionally used in electrolysis. The research, reported at the American Chemical Society national meeting in Philadelphia on Aug. 20, could lead to a simple, low-cost way to generate H2 to power fuel cells.

To facilitate the splitting of water, chemists usually use costly precious-metal catalysts deposited on electrodes. In one half of the electrochemical system, water is oxidized to liberate O2. In the other half, the protons generated can readily combine to give H2. The electricity needed to drive the overall reaction would ideally come from a solar cell.

Borrowing from biological systems, where metal-free, flavin-based enzymes are important catalysts for reduction and oxidation processes, a team led by Ksenija D. Glusac of Bowling Green State University has now shown that N-ethylflavinium ion catalytically oxidizes water to form O2. The researchers propose that O2 evolution occurs via formation of a flavin peroxide intermediate on the electrode surface, analogous to the mechanism of water oxidation with transition-metal oxide catalysts.

Speaking in the Division of Energy & Fuels, Glusac acknowledged that the flavinium catalyst has its limitations. The catalyst requires a high oxidation potential of 1.9 V, and it recycles only 13 times on average before becoming inactivated. But Glusac told C&EN she considers the flavinium ion a prototype.

“The water-oxidation reaction is of key importance to solar-fuel technology,” observes Thomas E. Mallouk, director of the Center for Solar Nanomaterials at Pennsylvania State University. “The discovery of a metal-free, molecular water-oxidation catalyst is unprecedented. Although the oxidation potential of this molecular catalyst is too high to be practical, the discovery suggests it may be possible to design more easily oxidized organic molecules to catalyze water oxidation.”