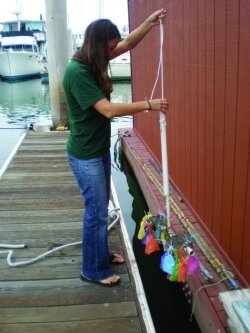 Some plastic debris in the ocean continues to absorb organic pollutants for months after reaching marine environments, according to a field study presented at the American Chemical Society national meeting in Philadelphia on Sunday. The findings, which contrast with earlier laboratory studies, could change how researchers assess the effect of plastics on marine animals.

When fish and other marine creatures eat plastic debris, they consume a cocktail of multiple stressors, including the plastic itself and the pollutants it absorbs, said Chelsea Rochman, a graduate student at San Diego State University, who presented the study in the Division of Environmental Chemistry.

Rochman and colleagues deployed pellets used to make six types of common plastics in San Diego Bay for up to a year. They retrieved samples at monthly intervals and used gas chromatography/mass spectrometry to measure concentrations of more than 50 persistent organic pollutants, including polycyclic aromatic hydrocarbons and polychlorinated biphenyls.

The researchers also found that some types of plastic absorbed 10-fold higher concentrations of organic pollutants than others, suggesting that some plastics could be more hazardous to fish than others.

This is one of the first field experiments to follow plastic debris over time to assess how it interacts with pollutants in natural waters, commented Mark Anthony Browne, an ecologist at the National Center for Ecological Analysis & Synthesis at University of California, Santa Barbara. “It provides our most accurate understanding yet of this phenomena and challenges several theories developed from more simple laboratory studies,” he told C&EN.