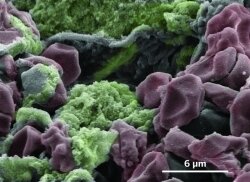 Nanoscale polymeric particles could one day offer a lifesaving treatment for internal bleeding. Currently, emergency medical responders have few options for treating internal bleeding in the field. Patients have to be taken to the hospital, where they undergo surgery and receive clotting factors or donated platelets. Now, researchers at Case Western Reserve University have developed artificial synthetic platelets that emergency responders could potentially administer at the scene of an accident.

The new particles are quite simple, said Erin Lavik, the biomedical engineering professor who led their development. They are roughly 300 nm in diameter with a core made of poly(lactic-co-glycolic acid)—the same stuff that goes into dissolvable sutures. A covalently attached polyethylene glycol corona keeps the particles from clumping together and helps them evade the body’s immune system. Finally, a tripeptide of arginine-glycine-aspartic acid, better known as the RGD peptide, decorates the surface. Platelets activated for clot formation have a receptor for this peptide, so the nanoparticles glom on to the platelets and help them clump together with blood cells.

Lavik presented the work today in the Division of Polymeric Materials: Science & Engineering at the American Chemical Society National Meeting in Philadelphia.

“In an injury, platelets become activated, and they start forming a clot,” Lavik explained. “What we’re doing is providing extra bridges to help them form that clot more quickly.”

Lavik’s team has had success using the particles to stop internal bleeding, with no adverse effects, in small animals. Next, they hope to scale the technology up to larger animals.

“Hemostasis is required in both the surgical suite as well as in emergency trauma,” David A. Putnam, a chemical engineering professor at Cornell University, told C&EN. “However, the control of internal bleeding remains a challenge. The work of Lavik and colleagues demonstrates a first approach toward an intravenously administered formulation that specifically initiates coagulation at the sites of bleeding. Although the formulation is in its early stages of development, it represents a unique and significant way to help solve the problem of internal bleeding.”