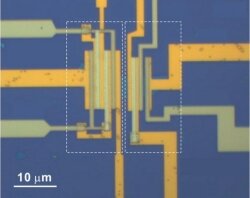 Researchers have built logic circuits, the heart of all electronic gadgets, on molybdenum disulfide films that are two molecular layers thick (Nano Lett., DOI: 10.1021/nl302015v). The devices are the first integrated circuit elements made from atoms-thick, two-dimensional materials, including graphene, and could lead to fast, flexible electronics.

Because two-dimensional materials such as graphene and MoS2 can conduct charge more efficiently and are stronger than silicon, researchers think the materials could enable bendable gadgets, such as wearable electronics or sensors that could be wallpapered onto the surface of aircraft or buildings. But materials scientists have not found an easy, effective way to give graphene a bandgap, an electronic property that all transistor materials must have.

So some researchers have turned to the semiconductor MoS2. In the past year, scientists have made transistors one at a time on separate MoS2 flakes. They’ve also connected individual MoS2 transistors through external wiring to make circuits. But Tomás Palacios and Jing Kong of the Massachusetts Institute of Technology wanted to take the next step toward functional MoS2-based electronics and create entire circuits on the same piece of material, as manufacturers do with silicon.

To start their fabrication process, the researchers peel off two-molecular-layers thick MoS2 films from a block of molybdenite. Each layer of molybdenite comprises a sheet of molybdenum atoms sandwiched between two layers of sulfur atoms. After transferring the films to a silicon substrate, they use electron beam lithography to deposit electrodes made of titanium and gold on top of the MoS2. Next, by using atomic layer deposition, they apply the dielectric material hafnium oxide, which prevents the circuits from shorting by keeping the electrodes isolated from each other. Finally, the researchers deposit another set of electrodes made from either palladium or aluminum. The choice of metal used for these electrodes dictates the nature of the transistor: one that is normally on or one that usually stays off.

“This is the first time anyone has fabricated these two different kinds of transistors on the same piece of MoS2,” Palacios says. He adds that the team had to experiment to find metals for these top electrodes with the proper electronic properties in order to produce both types of transistors.

Using these fabrication methods, the researchers built four types of logic elements, each containing between two and a dozen transistors. One of the elements is known as a NAND gate. It’s one of two basic logic gates that can be used to construct any other logic gate, and as a result, any kind of integrated circuit.

Andres Castellanos-Gomez of Delft University of Technology, in the Netherlands, says it is remarkable that the MIT group fabricated functional integrated circuits with MoS2 only a year after the first demonstration of MoS2 transistors. He points out that scientists haven’t yet made similar devices with graphene, despite spending many years researching the carbon material.

MoS2 electronics are still far from commercial applications, Palacios says. He and his colleagues are now developing techniques to grow MoS2 on a large scale to make the fabrication process more practical and enable larger circuits.