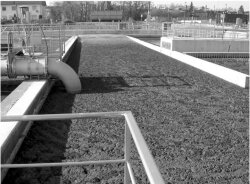 A thermochemical process can convert lipids from sewage sludge into biodiesel, according to a new study (Environ. Sci. Technol., DOI: 10.1021/es3019435). The low cost and high yield of the sludge process may make it economically feasible as a source of biofuel, the researchers say.

Today, biofuel producers use vegetable oils or animal fats to derive biodiesel, a mixture of fatty acid methyl esters. Biodiesel is compatible with existing diesel engines, burns with less pollution than petroleum-derived diesel does, and comes from renewable resources. But the high cost of biodiesel production limits its widespread use, says Eilhann Kwon of the Research Institute of Industrial Science and Technology, in South Korea. Much of its cost stems from the price of raw materials to make biodiesel, such as refined soybean or rapeseed oil.

Kwon and his colleagues found a cheaper feedstock for biodiesel production: sewage sludge, the semisolid material left over from wastewater treatment. This sludge is a rich source of lipids, the starting material for biodiesel. Most of sludge’s lipids come from bacteria living in it.

Kwon and his team used n-hexane to extract lipids from sludge pellets from a wastewater treatment plant in Suwon-City, South Korea. Compared to published yields of lipids from soybeans, the sludge produced 2,200 times more lipids per gram of feedstock. Sewage sludge is also a cheaper lipid source than soybeans, Kwon says. Each liter of lipids that the researchers extracted from sludge cost $0.03, while previously published data shows each liter from soybeans costs $0.80.

The team thought that heat, rather than catalysis, could drive the reaction of lipids with methanol to make biodiesel. They also reasoned that more contact time between the lipids and methanol would make the reaction more efficient. So they planned to run the reaction in a porous material to trap the reactants together.

To test their idea, the team continuously fed methanol and the extracted sludge lipids into a reactor containing porous activated alumina and heated the reactor to 380 °C. Adding carbon dioxide to the reactor improved the reaction’s yield. The researchers’ method converted about 98% of the sludge lipids to biodiesel.

“Waste is not simply waste—it can be converted into useful resources like biodiesel,” says Kwon. He says that large-scale implementation of the new process would require wastewater treatment facilities to install equipment to desiccate sewage sludge and to extract lipids. He thinks that in the long run, selling the extracted lipids to biodiesel producers would more than pay for these investments.

Rafael Hernandez of Mississippi State University, who has worked on catalytically producing biodiesel from sludge, says the researchers’ non-catalytic method is interesting, and their results are “very encouraging.” However, he notes that the types and quantity of lipids in sewage sludge vary between wastewater treatment facilities. As a result, the production costs and yields will vary from plant to plant, Hernandez cautions.