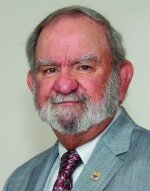 William (Jack) H. Breazeale, professor emeritus at Francis Marion University and an adjunct professor at the College of Charleston, is the recipient of the 2013 Award for Volunteer Service to the American Chemical Society. Created in 2001, the award recognizes individuals who have contributed significantly to the society’s goals and objectives.

Breazeale says he was “surprised and gratified” to learn that he had received the award. “Having been able to work with the people I have worked with, who have guided me in the direction I have gone, and allowed me to take a leadership role in the activities I’ve been involved in, there’s no other way to express my appreciation than to say: Thank you very much.”

“Jack Breazeale is a great ambassador for chemistry and the chemistry profession,” says James P. Deavor, professor of chemistry and biochemistry at the College of Charleston. “He has served with energy, intelligence, imagination, and love, giving his very best to a wide spectrum of endeavors, all done with the highest degree of professionalism and competence.”

Breazeale received a B.S. in chemistry in 1961 and a Ph.D. in physical chemistry in 1966, both from the University of South Carolina. Breazeale joined ACS in 1965 and has served as a councilor for the South Carolina Section since 1984. He has also served on numerous committees, including the Committee on Chemical Safety, the National Chemistry Week Task Force, and the Committee on Committees. He currently chairs the Committee on Nominations & Elections and the Board of Trustees, Group Insurance Plans for ACS Members. Breazeale was named an ACS fellow in 2010.

“He’s the kind of person who would go out of his way to help anybody at any time,” says Frederick J. Heldrich, a chemistry professor at the College of Charleston who has worked closely with Breazeale in the South Carolina Section. “I have incredible admiration for his diligence, his energy, and his passion and enthusiasm for chemistry and for supporting the work of chemists.”

Deavor notes that Breazeale played an instrumental role in converting the National Chemistry Week Task Force to a full committee, which became the broader Committee on Community Activities.

Patricia Redden, chemistry professor and chair of the chemistry department at Saint Peter’s College, in New Jersey, praised Breazeale’s commitment to improving chemical safety. Since 1985, Breazeale has been an instructor with the nonprofit Laboratory Safety Institute. In 1987, he joined the Committee on Chemical Safety, and he chaired the committee from 1995 to 1997. “Jack really went above and beyond the call of duty on that committee,” says Redden, who also serves on the committee. “He’s the epitome of a gentle person who is very strong in his commitments and very dedicated to his work.”