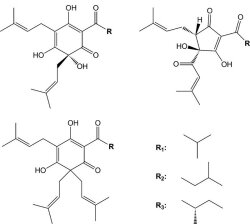 Stomach Churning
These hop-derived bitter acids amp up beer’s ability to make the stomach secrete gastric acid. Iso-α-bitter acids (top right), which are produced during brewing, are among the most potent.
Credit: J. Ag. Food Chem.

On a hot summer day, sipping a cold brew can be a relaxing treat. But when the beer hits the stomach, it stimulates the release of gastric acid, an overabundance of which can lead to ulcers, acid reflux, and even stomach cancer. Now researchers report that the bitter acids derived from hops are key players in stimulating gastric acid secretion (J. Ag. Food Chem., DOI: 10.1021/jf204306z).

Previously, scientists had found that beer contains a cabal of compounds, such as ethanol, maleic acid, and succinic acid, that can promote gastric acid secretion. Veronika Somoza, of the University of Vienna, and her colleagues wanted to check out a class of compounds that hadn’t been studied yet: the bitter acids from hops.

The findings are good news, she adds: Brewers could produce stomach-friendly beers by choosing their hops and controlling how long they heat the ingredients.

Comments
Catherine Haustein  (February 14, 2012 8:58 PM)
What about using this for good? Isn't it true that older people secrete less stomach acid and this affects their ability to absorb certain nutrients? A round of beer for the elderly might be a good thing.
» Reply
Robert Ingelbach  (February 15, 2012 9:10 AM)
Catherine has a point. The average 60-year-old produces only a quarter as much stomach acid as a 20-year-old.
» Reply
gavin gear  (February 15, 2012 12:02 PM)
Everything we eat stimulates the production of gastric acid via the proton pumps - the fact this MAY lead to acid reflux has little to do with the gastric acid production - this is a normal function of the digestive system. different foods and liquids cause different amounts of gastric acid production - this is natural - to suggest consumption of beer could lead to cancer is simply irresponsible science.
On the contrary, there are significant studies demonstrating the benefits of beer (hops) in calming the stomach.

» Reply
Valerie P  (February 21, 2012 12:35 PM)
Agreed - not only is the suggestion of stomach cancer a bit irresponsible - it's a tad premature into their research.
» Reply
Kenneth Moore  (February 23, 2012 3:28 PM)
Just to clarify this point--the researchers did not suggest beer alone causes cancer or those other health concerns. An oversecretion of gastric acid can lead to health impacts, certainly, but beer is just one very geographically widespread player, which is why the researchers looked at it in that context. And analyzing the activity of the bitter acids, which the researchers found to have quite a large gastric acid secretion impact for their concentration in the drink, could lead to brews that perhaps don't cause as much release of gastric acid.

Beer is a very complex drink, chemically, and can vary from brew to brew--and even batch to batch of the same brew. Getting a full idea of all the impacts it can have on humans will take a lot more research!
» Reply
Diana Manzano  (February 21, 2012 9:52 PM)
Maybe,if too much intake of beer could lead to certain disease e.g. ulcers, cancers.Elimination of this drinks is impossible and moderation still is the best control.
» Reply
Clinton Egbe  (February 24, 2012 6:23 AM)
Also, we should not forget the antioxidant function of those 'bitter compounds'.
» Reply
Elliott Echt  (July 19, 2012 10:42 AM)
I just like the sentence that includes "...scientists had found that beer contains a cabal of compounds, such as ethanol,..."

If only I had known.
» Reply
Kathleen  (March 21, 2013 12:01 PM)
As an over 60 year old who is tired of indigestion after eating certain foods... I began to notice that when I consumed a nice bitter IPA... The indigestion never arrived! Then I started doing a little reasearch and found that hoppy IPA beers impart a bitter quality that stimulates gastric acid secretions. I also noticed that beers with alot of malt didn't give the same results. Even IPA's that list malt as a first ingredient. This is totally anecdotal however worth noting. And yes, I learned of antioxidant properties too... There is a healthy aspect to beer! Keep up the good work chemists!
» Reply
Leave A Comment
Most popular
Related Articles
Advertisement
Info for Advertisers
Copyright ©2014 American Chemical Society