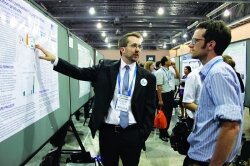 Jesse Thompson (left) of the University of Kentucky explains his research to a passerby at Sci-Mix.
Credit: Linda Wang/C&EN

The City of Brotherly Love lived up to its moniker last week, with Philadelphia Mayor Michael A. Nutter giving a delightfully warm and self-deprecating welcome to attendees at the 244th American Chemical Society national meeting.

Nutter spoke during one of the meeting’s highlights—The Kavli Foundation Innovations in Chemistry Lecture by Massachusetts Institute of Technology professor Robert S. Langer. Other popular events included plenary lectures related to the meeting’s theme of “Materials for Health & Medicine.”

In all, more than 13,000 chemists and other visitors attended the conference, including more than 3,000 students and 1,200 exposition exhibitors. The on-site ACS Career Fair hosted 45 employers and approximately 1,000 job seekers, who perused nearly 150 available positions. The Virtual Career Fair facilitated online interaction among 13 employers and 1,500 job seekers.

Chemists presented more than 8,000 papers covering topics as diverse as a new oil-spill dispersant and a simple assay to identify counterfeit drugs.

At a daylong session on the Innocence Project—an organization dedicated to exonerating wrongly convicted prisoners through analysis or reanalysis of DNA and other physical evidence—speakers described how faulty forensic science can contribute to wrongful convictions and urged ACS members to help set new standards for forensic science disciplines.

Also at the meeting, the Committee on Chemical Safety and the Division of Chemical Health & Safety endorsed a proposal to peer-review a University of California lab safety training program that is being established in response to the death of a young researcher at UCLA (C&EN, Aug. 13, page 34).

Other activities included the ACS Board of Directors open meeting, which featured a discussion of ethics, and the ACS Council meeting, at which councilors explored ways for ACS to address the global water crisis. ACS President Bassam Z. Shakhashiri, who led the council discussion, noted that more than 1 billion people lack access to safe drinking water. Councilors suggested several possible actions for ACS, including conservation, development of education materials, and coordination with other societies to prevent duplication of efforts.

In other business, the council approved a request to form a Committee on Senior Chemists (C&EN, June 25, page 47). Final approval rests with the ACS Board of Directors.

The council rejected a petition seeking to change society bylaws to limit publication of articles in C&EN by candidates for top ACS offices during the six months before society elections (C&EN, Aug. 6, page 41). The council also rejected a petition to allow the board of directors to fund specific ACS activities at the society’s international chapters, at least in part because councilors believed the board already has this ability. Voting on a proposal to alter allotment of local section funding was deferred until next year.

A proposed realignment of two electoral districts, intended to keep member numbers in compliance with ACS bylaws, proved surprisingly controversial. Among other objections, some councilors noted that previous district realignments hadn’t always made sense geographically and that additional realignments will soon be needed. The council eventually approved the proposed realignment but called for further study of redistricting on a nationwide basis.

The Committee on Budget & Finance met in Philadelphia to review the society’s projected 2012 financial performance. Revenues are expected to reach $491.6 million by year-end, and net contribution from operations is projected to total $17.4 million, or $1.6 million more than had been budgeted.