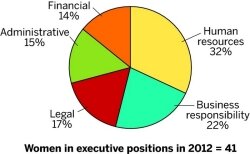 BREAKING IT DOWN
A plurality of women in top executive positions at chemical firms work in human resources. NOTE: Data are based on the companies listed on table below.

Once again, C&EN’s annual survey of upper levels of management at chemical companies finds reasons to cheer as well as some cause for disappointment. One reason to cheer is shareholders of chemical firms elected more women to the boards of directors during the past year. However, chemical company boards didn’t appoint enough women to increase the overall representation of women in the executive ranks.

The survey finds that 54 of the 403 directors serving at 42 top chemical companies are women. That is a rate of 1.3 women per firm and 13.4% of the total number of board positions. These figures are an increase over a year ago, when these same firms had an average of 1.1 women on each of their boards and a 12.1% representation overall.

Nevertheless, women aren’t any more prominent among chemical company executive officers than they were last year. Women hold 41 of 417 executive officer slots at chemical firms, for a rate of 1.0 per company and an overall representation of 9.8%. One year ago, C&EN’s survey also found 1.0 woman per company, but a 9.9% representation rate. The proportion of women executives declined this year because although their numbers rose, so too did the total number of officers. A year ago, 40 women out of a total of 406 executives were listed at the 42 firms.

To compile the annual survey, C&EN consults company annual reports and proxy statements as well as 10-K filings and other documents filed with the Securities & Exchange Commission from major publicly traded U.S. companies that have significant chemical businesses. Executive officers are those people listed as such in a firm’s 10-K or proxy statement. Additionally, C&EN counts directors who were serving up to the time of the most recent annual meeting.

To maintain a fair comparison, C&EN tries to survey the same 42 companies each year. But mergers and acquisitions make that impossible, so companies often need to be replaced.

Many such changes have occurred since last year’s survey. Specialty chemical maker Arch Chemicals was purchased by the Swiss firm Lonza. For this year’s survey, C&EN replaced Arch with the specialty chemical company OM Group. Lubrizol also disappeared after being acquired by Berkshire Hathaway; another fuel additives firm, Innospec, takes Lubrizol’s place. Cleaning specialist Ecolab bought a firm on the survey, the water treatment company Nalco. C&EN now includes Ecolab on its list. Sunoco dropped from the survey because it sold its chemical businesses, but another petrochemical maker, Lyondell­Basell Industries, is now included.

To make apples-to-apples comparisons with last year’s survey, C&EN revised the prior year’s data to include the new firms.

Because of the departure of Sunoco, which until recently had been led by Lynn L. Elsenhans, the survey now lists only one woman as chief executive officer of a chemical firm: DuPont CEO Ellen J. Kullman. This year, only one woman is working as a chief financial officer at a chemical company, Karyn F. Ovelmen, who replaced Kent Potter at Lyondell­Basell.

This year, C&EN is analyzing the kinds of positions the 41 female executive officers hold at the firms surveyed. Positions that compose the corporate infra­structure—roles in administrative and legal departments—dominate the employment of women versus positions, such as financial and business unit responsibility, that are perceived as stepping stones to becoming CEO and CFO. Human resources is the largest category, accounting for 32% of all women executives. Responsibility for business units is next, with 22%. Some 17% of the women perform legal functions. And women serving in administrative or financial roles at chemical firms make up the balance. 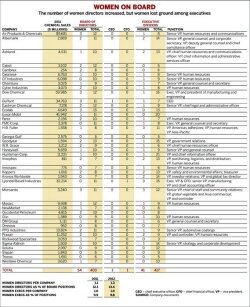 C&EN’s survey of women serving in the upper ranks of corporations isn’t unique. In fact, it was modeled on similar studies of Fortune 500 companies conducted by Catalyst, a New York City-based group that advocates for the advancement of women in business.

Companies of all kinds should want to increase the proportion of women serving in their upper ranks, Catalyst says. According to a study it conducted of corporate performance between 2004 and 2008, companies with three or more women on their boards of directors outperformed firms with zero representation in terms of returns on sales, invested capital, and equity. “Companies have much to gain by defying assumptions and taking action to advance talented women,” Catalyst CEO Ilene H. Lang says. “Continued obstacles to progress make no sense.”

Catalyst has advice for companies that want more women in leadership positions. One recommendation is “checking if the ‘think leader, think male’ default is still alive and well,” the group says. “Gender-based stereotyping is embedded, often unintentionally, in the very management systems designed to cultivate an organization’s best talent.” Additionally, because “women don’t receive the sponsorship of highly influential individuals” to the same extent as men do, Catalyst says, it backs mentorship programs at companies.

But mentorship should begin much earlier in a woman’s life than in the corporate setting, especially for those women interested in pursuing careers in science, technology, engineering, and mathematics (STEM) areas, according to Karen D. Purcell, an electrical engineer and author of the book “Unlocking Your Brilliance: Smart Strategies for Women To Thrive in Science, Technology, Engineering, and Math.”

Purcell tells C&EN that in middle and high school, boys who are interested in math and science are made aware of careers in science and engineering. Such nurturing doesn’t happen as often for girls.

“One of the biggest hurdles is just really encouraging younger women to even consider STEM fields as they move into college and giving them the information that they need to realize that there are opportunities in the STEM fields,” Purcell says.

The problems persist later on, Purcell says, recalling that when she was in college, it wasn’t until her junior year that male students started including her in study groups. “It can be frustrating and not very friendly for young women, who can be intimidated very easily,” she notes.

Encouraging women at an early age can be rewarding down the line for companies, such as chemical firms, that need good people in STEM jobs. The more women who pursue STEM careers, Purcell notes, the bigger the pool from which such firms can draw executive talent.