What Researchers Who Want To Be Entrepreneurs Need To Know

Scientists who are driven to start their own business and take the risks a start-up entails must think carefully about their technology, personal goals
By Susan R. Morrissey
Department: Business | Collection: Entrepreneurs
Keywords: entrepreneurs, startups
More On This Story
[+]Enlarge 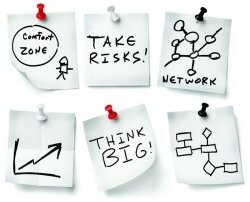 Basic research used to be pretty straightforward. A scientist had an idea, performed the research, and disseminated the results broadly through publications.

That paradigm has shifted. Today, scientists can take their work beyond a publication by patenting and commercializing resulting technologies. The government and universities alike are encouraging researchers to take their work out of the lab and into the commercial sector.

But trading an experimental design for a business plan is not for everyone. The choice requires a careful examination of one’s self and one’s technology. It also requires learning an entirely new language. Resources are available to help scientists make their way; however, it comes down to a personal choice. For those who decide they and their business idea are ready, they have the potential to experience the satisfaction of seeing what they have developed meet a market need by getting it into the hands of the public.

“Working in a large company can feel like being a small gear in a large machine,” says Scott P. Lockledge, chief executive officer and cofounder of Tiptek, a manufacturer of ultrahard and ultrasharp probes for atomic force microscopy applications. “Founding a company gives you the opportunity to create an enterprise, be it large or small, in which you know you are personally making a difference.”

A researcher developing corrosion inhibitors for petroleum production and then polymer stabilizers for vinyl products until 1999, Lockledge explains that he was also motivated to become an entrepreneur by the desire to control his own destiny. “When you work for someone else, your boss’s priorities dictate your work-life and lifestyle,” he explains, adding that “as an entrepreneur, you decide when and where you work.”

The drive to innovate also motivated Lockledge, who holds a Ph.D. in inorganic chemistry. “Many of us studied science because building things that were new and better fascinated us,” he says. “Inventing and innovating is fun, and the opportunity to do so in a large company setting is increasingly rare. In contrast, science-based start-up businesses are predicated on radical innovation.”

“Many scientists intrinsically understand that their discoveries might translate into important, highly profitable entrepreneurial enterprises,” says Madeleine Jacobs, executive director and CEO of the American Chemical Society, which published a report last year on chemical entrepreneurs (C&EN, Nov. 7, 2011, page 47). “But making a discovery or patenting an invention is only the beginning of creating a company. Bringing that idea or invention to commercialization and creating a successful company requires a different set of skills and knowledge than carrying out basic research.”

To help scientists get the necessary skills, ACS and other groups are stepping up with training courses and other resources. Before scientists can take advantage of the assistance, however, they need to critically assess both their personal goals and the state of their technology.

“The activity of commercialization is actually separate from doing science,” explains Ph.D. chemist Judith Giordan, partner at ecosVC, a group that develops and funds start-ups. “The science can be very dispassionate—the reaction either worked or not. But how you sell it and position it and handle it, that’s a completely human endeavor.

More frankly, “Is being an entrepreneur something you really want to do?” asks Judith J. Albers, cofounder and facilitator of the Pre-Seed Workshop and managing partner of its umbrella group, Neworks. Based in upstate New York, the workshop is a two-and-a-half day program that teams scientists with experts in business and legal matters to do a first-cut analysis of a technology’s commercial potential.

Because of the commitment needed to gain skills and get a company off the ground, Albers points out, scientists also need to ask themselves if the time is right in their life to take a turn in their career path. For example, an academic researcher who is about to go up for tenure can’t afford to focus on anything else.

Related to timing is the question of how far one wants to go down the entrepreneur path. “Do you personally want to be an entrepreneur,” Giordan asks, “or do you want to franchise and empower” others, such as graduate students and postdocs, to go down that road?

In addition to the personal questions, Albers explains, scientists need to ask a core set of questions about what they want to commercialize: Is there a market need? If so, does the technology provide the solution to that need? Does anyone else have a better solution? And finally, can enough money be made to cover bringing the technology to market and enticing investors to invest?

Lockledge—who, prior to his current start-up, had successfully founded and exited from another start-up company—echoes the need to work through those questions. “At the outset,” he explains, “you make certain assumptions about the severity and extent of the problem your invention resolves.” The key is not to “waste tremendous resources perfecting a process or product for which there is no genuine demand.” Instead, he says, “get a working prototype of your innovation into the hands of a person who can evaluate it as quickly as possible. Don’t let perfection be the enemy of success.”

Beyond these market-need questions, Albers also says scientists need to ask themselves a series of reality-check questions. How close is the technology to going to market? “If you still have a lot of research to do, stay in your lab and don’t form a company just yet,” she says. “If you’re in a university or federal lab, stay there and exploit your grants as long as you can.”

Scientists also need to consider whether they have a credible plan in place to take their technology to market and how much will it cost, Albers says. Addressing these questions is more complicated for therapeutic innovations in the life sciences because of regulatory hurdles that need to be considered such as clearing clinical trials, she notes.

And, perhaps most important, scientists must assess if they have a team in place that has all the expertise needed to take the technology successfully to market. “As a scientist,” Albers points out, “you’re not going anywhere yourself.” Specifically, scientists will need to partner with business and legal professionals to launch a start-up.

“You can always hire experts in these other areas, but you still need to speak their language,” Lockledge notes.

Getting such skills and, more simply, understanding what key terms mean require learning a new culture. “You have to embrace that you are a novice on this new path,” Giordan says. In doing so, however, scientists face an array of challenges.

“Many people who become scientists do it because they love tasks and they love getting data and getting the job done,” Giordan says. “They want to get the data perfect and the job done well. But, as an entrepreneur, there’s not one day that all things are going to be perfect.”

Increased time demands, finding the right people to partner with in the start-up, and giving up absolute control and ownership of the technology and start-up as things advance are other complications facing scientists, Albers notes. The biggest of these, she points out, is time.

Entrepreneurs look to different sources of capital as their start-ups mature.

Self, family, and friends Funds to fill the gap between the time a scientist wants to spin off a company and the time other investment sources can be secured.

Seed funds Start-ups can look to these funds, often supported by state governments, to combine with angel investments.

Early-stage venture capitalists (VCs) Run by a fund manager, this investment source is available to companies that are already generating some revenues.

Expansion-stage VCs Run by a fund manager, this VC stage targets companies looking to grow beyond a small start-up.

To help with time, both Albers and Giordan advocate pulling in graduate students or postdocs who can dedicate themselves more completely to moving the technology forward.

Challenges aside, Giordan notes that scientists are well suited to learning the skills they need to navigate the entrepreneurial pathway because they are intelligent and logical, and they understand how to do research.

A growing number of options can help scientists navigate the entrepreneurial waters, from short workshops—like the Pre-Seed Workshop Albers is part of—to long-term courses to resource initiatives all geared for supporting entrepreneurs.

Academic scientists, who used to have only their institution’s technology transfer office to go to for help, now can take advantage of entrepreneur centers within many business schools, as well as government-sponsored programs like the National Science Foundation’s Innovation Corps (see page 24 ).

Organizations such as ACS have also stepped up to provide help specific to chemical entrepreneurs, Albers and Giordan note. The society has created the ACS Entrepreneurial Initiative, in response to the ACS Presidential Task Force on Innovation in the Chemical Enterprise report “Innovation, Chemistry, and Jobs” (C&EN, July 30, page 57).

One part of the initiative is the Entrepreneurial Training Program (ETP). Here ACS is partnering with the Kauffman Foundation, a nonprofit organization dedicated to supporting entrepreneurship. The partnership allows ACS members to apply through ACS to attend the foundation’s FastTrac courses on entrepreneurship, which are held around the country. To date, 29 ACS members have participated in this program.

The Entrepreneurial Resources Center (ERC) is another big piece of ACS’s initiative. To date, 20 chemical start-ups have been accepted into ERC, which works with new start-ups to strengthen their business plans, draft fund-raising strategies, and make networking connections.

“We see these initiatives as a means to help ACS members create a wave of entrepreneurial activity in the chemical enterprise—one of our nation’s most vital and valuable economic sectors,” ACS’s Jacobs says.

ACS has also developed an open forum for chemical entrepreneurs within the ACS Network. The forum is a free resource for all ACS members with service provider listings, entrepreneurial news, and discussions to encourage collaboration and innovation, explains David Harwell, who is coordinator for the ACS Entrepreneurial Initiative.﻿

“We are very pleased to see ACS members take advantage of these programs and look forward to even greater participation in the coming year,” Harwell says.

These sources of help can go a long way in preparing scientists to take the step out of the lab and into entrepreneurship, but in the end it comes down to a personal choice.

“There are a lot of ways for you to get all of the vocabulary, the information, the knowledge, and the capability to do the work necessary to prepare yourself to make the phone call to potential investors,” Giordan says. “But only you can decide how far you can emotionally find yourself going toward being the entrepreneur and leading the company and gaining funding.”

In the pages that follow, C&EN profiles more than a dozen chemical entrepreneurs, including chemists just starting to explore a start-up, those who have done it multiple times, and one whose whimsical business idea has given her real experience in navigating the entrepreneurial scene. They share their ideas-to-market stories, as well as tips for anyone considering going commercial.

MORE ON THIS STORY