QUICK ASSEMBLY
An aldol cascade reaction of succinaldehyde is key to a shortened synthesis of PGF2α.
[+]Enlarge 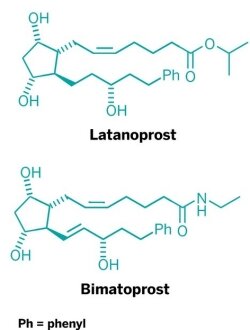 A seven-step synthesis of prostaglandin PGF2α, the most complex structure in the prostaglandin family, has been reported by chemists at the University of Bristol, in England (Nature, DOI: 10.1038/nature11411). The abbreviated synthetic sequence could cut the cost of making prostaglandin-based drugs and give chemists a new approach for preparing potentially therapeutic prostaglandin analogs.

Prostaglandins play a role in numerous biological processes, including sleep, pain, fever, inflammation, menstruation, birth, constriction of blood vessels, and blood clotting. The prostaglandin analog latanoprost (Xalatan) is a glaucoma treatment that generated more than $1 billion annually for Pfizer until it came off patent last year. Bimatoprost, another prostaglandin-based compound, has been used to treat glaucoma and ocular hypertension (under the trade name Lumigan), as well as to lengthen eyelashes (under the trade name Latisse).

Prostaglandin total synthesis experienced its heyday decades ago. In fact, a 20-step sequence used to manufacture latanoprost is based on a prostaglandin synthesis strategy developed by Harvard University professor E. J. Corey back in 1969.

“I was teaching a course on synthesis that used prostaglandins as examples,” says Varinder K. Aggarwal, who developed the shortened sequence with coworkers Graeme Coulthard and William Erb. “While doodling in my office, I came up with a unique and very short route.”

The key step weds two succinaldehyde molecules in an aldol cascade reaction to form a bicyclic enal intermediate in one step. The reaction uses the organocatalysts proline and [(C6H5CH2)2NH2][OCOCF3] to create the enal with an enantiomeric excess of 98%.

This seemingly simple reaction turned out to be the most challenging aspect of the synthesis, Aggarwal says. Its meager yield—16% for a multigram scale—arises from the fact that the succinaldehyde tends to polymerize. The [(C6H5CH2)2NH2][OCOCF3] catalyst, which promotes the second aldol reaction in the cascade, interferes with the first aldol reaction, which is catalyzed by proline, Aggarwal explains. So the second catalyst must be added after most of the succinaldehyde is consumed but before polymerization dominates; it’s a difficult balance to achieve.

“The polymer is easy to filter off, so purification is not a problem,” Aggarwal points out. “I believe there may be a second catalyst out there that is compatible with the first proline-catalyzed aldol reaction and is able to promote the second aldol reaction. This would lead to an increase in yield, and the two catalysts would be added at the same time. But we haven’t found that catalyst yet.”

Once the bicyclic enal is prepared, making the rest of the structure is just a matter of appending the prostaglandin’s side chains and springing open the acetal ring. Aggarwal tells C&EN that in addition to making PGF2α, his group has used the synthetic strategy to make both latanoprost and bimatoprost—routes for which they have filed a patent.

“The prostaglandins have been such a huge synthetic challenge for decades and have attracted the attention of generations of the very best chemists,” comments Benjamin List, an organocatalysis expert at Max Planck Institute for Coal Research, in Mülheim, Germany. “Yet the approach by Aggarwal is unbeatable in its conciseness and elegance. It also underscores the enormous potential of organocatalysis in general and proline catalysis in particular for drug manufacture.”

“Aggarwal’s work is to date the most beautiful application of our proline-catalyzed self-aldol reaction of aldehydes,” adds Carlos F. Barbas III of Scripps Research Institute. “I think we will see more and more results like this as synthetic chemists learn to incorporate the vast repertoire of novel and simple asymmetric reactions that organocatalysis has provided since the turn of the century.”