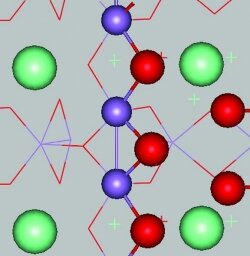 The researchers investigated the catalyst’s mechanism using infrared Fourier transform spectroscopy as well as density functional theory calculations. They found that its catalytic activity is localized at Mn–Mn dimers on the rough, defect-riddled, or “stepped” mullite surface.

Researchers have put a lot of effort into the search for metal-oxide catalysts. For example, scientists reported the development of a strontium-doped perovskite oxide catalyst that outperforms platinum catalysts (C&EN, March 29, 2010, page 11).

However, various factors, including lack of thermal stability, have bedeviled efforts to industrialize them.

Chang H. Kim of General Motors Global R&D, whose team developed the perovskite catalyst, notes the new catalyst’s good NO-to-NO2 conversion abilities but cautions that like other potential catalysts, this material will have to withstand the rigors of real-world conditions.

Yasutake Teraoka, a materials science professor at Japan’s Kyushu University, praised the research. “The development of nonplatinum catalysts for NO oxidation is very challenging,” he says.

Parks also points out that the catalyst might find use in so-called lean-burn engines, which use much less fuel than traditional internal combustion engines. Emissions control systems in these engines are costly and limit their commercialization, he says. The new work, he notes, “may provide a solution for cost-effective lean gasoline emission control.”

Comments
S. R. Vatcha  (08/22/2012 at 7:42 PM)
The article states that the catalyst converts the toxic diesel engine exhaust product nitric oxide to the more benign nitrous oxide. According to the cited original article (Science, August 17, 2012), this catalyst is designed for oxidation of nitric oxide (NO) to nitrogen dioxide (NO2), not to nitrous oxide (N2O). None of the oxides of nitrogen (NOx) are safe or benign. Nitrogen dioxide (NO2) is a toxic large-scale air pollutant that contributes to acid rain (http://en.wikipedia.org/wiki/Nitrogen_dioxide). Converting one toxic pollutant into another is useless.

The best way to reduce NOx pollution is to prevent NOx formation at the source. Catalytic combustion, which does not form NOx, has been commercialized for gas turbines but not for reciprocating IC engines [Vatcha, S. R.; Turbine, Gas, Controlling NOx Emissions; Encyclopedia of Chemical Processing and Design; 59; 179-190; Marcel Dekker; New York; 1997].

The next best way is to decompose NO into its elements, which are benign. This method is applicable to any source of NO [Vatcha, S. R.; Prospects for Catalytic Nitric Oxide Decomposition in Air Pollution Control; Catalytica Environmental Report No. E1; Catalytica Studies Division; Mountain View, California; 1992].

Every element in the Periodic Table is unique and distinct. There are reasons why platinum is called a noble or precious metal and manganese is not.
» Reply
Leave A Comment
Most popular
Copyright ©2012 American Chemical Society