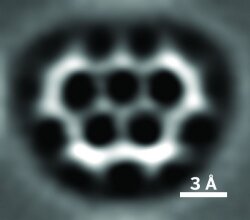 The 2012 Olympic Games start in London this week, and the Newscripts gang have cleared our video recorders and stocked up on remote-control batteries in order to watch every possible moment.

Some chemists in England went the extra mile to welcome the games by preparing “olympicene,” a C19H12 molecule with a five-ring structure that resembles the Olympic rings. Synthesized by David Fox and Anish Mistry of the University of Warwick, the molecule was subsequently imaged with atomic force microscopy by the same IBM Research group in Switzerland that revealed stunning images of pentacene a few years ago (C&EN, Aug. 31, 2009, page 6).

To Newscripts’ eyes, olympicene is no less beautiful. The molecule might have interesting electronic or optical properties that could be put to use in solar cells or other devices, Fox says. Also known as benzo[cd]pyrene, olympicene was first prepared a few decades ago, but Fox and Mistry designed an improved synthetic approach. They and colleagues are now preparing a paper that will detail both the production and imaging of olympicene while they continue to research the molecule’s properties.

The winners of some Olympic events are decided by mere hundredths of a second, so every little bit of advantage counts. Swimmers, in particular, can gain a competitive edge by spreading their fingers, rather than cupping them together. 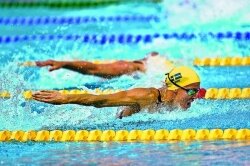 A paper published in the Journal of Theoretical Biology now gives a specific target for how much finger spread is best: between 0.2 and 0.4 times the diameter of the individual fingers (DOI: 10.1016/j.jtbi.2012.05.033). The reason has to do with the “boundary layer” of water that sticks to each finger and moves with it through the liquid, says study leader Adrian Bejan, an engineering professor at Duke University and author of the book “Design in Nature.” Spread the fingers just right, and the boundary layers form an effective web between the digits, making the hand a bit more like a paddle and maximizing the force it can exert on the water.

Whether the athletes in London set new swimming records remains to be seen, but along with news of those or other Olympic feats will likely come stories of athletes trying to help themselves with performance-enhancing drugs. Such sports doping goes back at least to the late 1800s, says Vanessa Heggie, a postdoctoral researcher in the history and philosophy of science at the University of Cambridge and author of “A History of British Sports Medicine.”

In a blog post at the Guardian newspaper’s “Notes & Theories: Dispatches from the Science Desk,” Heggie describes how American athlete Edward P. Weston tried to walk 115 miles in 24 hours in 1876. Despite chewing on cocaine-containing coca leaves, he managed only 109.5 miles. Other athletes of the late 1800s also used “tonics” such as extracts of meat or coca leaves, alcohol, or strychnine—yes, in small doses, it’s a stimulant—to try to improve their performance, Heggie says.

A particularly interesting character of this period is Justus F. von Liebig, Heggie says. Von Liebig’s vision “was to reduce biology to chemistry, to find the chemical laws that would explain weird biological phenomena,” Heggie tells Newscripts. In particular, von Liebig tried to understand nutrition and metabolism by following athletes’ food intake and waste output. Although he erred in his belief that protein was the human body’s major energy source, his scientific approach set the standard for those who eventually demonstrated that carbohydrates and fats matter more for energy production.