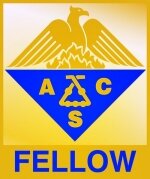 The American Chemical Society has named 96 members as ACS Fellows. The new fellows will be honored at the society’s fall national meeting in Philadelphia this August, in a ceremony hosted by ACS Immediate Past-President Nancy B. Jackson.

“ACS is especially proud to honor these chemists, who have given so much to the community and the profession,” said Jackson in announcing the 2012 class of ACS Fellows. “They are leaders whose work is having a lasting beneficial impact, not just on science but also on the ACS community.” Their contributions include outstanding and creative scientific research, superior achievements in the teaching and learning of chemistry, managerial excellence, and volunteer service through meetings and communication with the public, she noted.

The fellows program began in 2009 as a way to recognize and honor ACS members for outstanding achievements in and contributions to science, the profession, and ACS.

Nominations for the 2013 class of ACS Fellows will open in the first quarter of the year. Additional information about the program, including a list of fellows named in earlier years, is available at www.acs.org/fellows.

U.S. Court of Appeals for the Federal Circuit

Comments
Diana Chapman Walsh  (07/23/2012 at 4:25 PM)
The family of Sally Chapman thanks the selection committee, and the nominators, indeed everyone at ACS and beyond who had a hand in the decision to confer this honor on her, as it turns out, posthumously.

Sally treasured her identity and work as a chemist, as had our father, a chemical engineer and a lifelong subscriber to C&E News. What a joy it would have been to him--as it is now to us--to see her name on the distinguished roster of 2012 ACS Fellows.